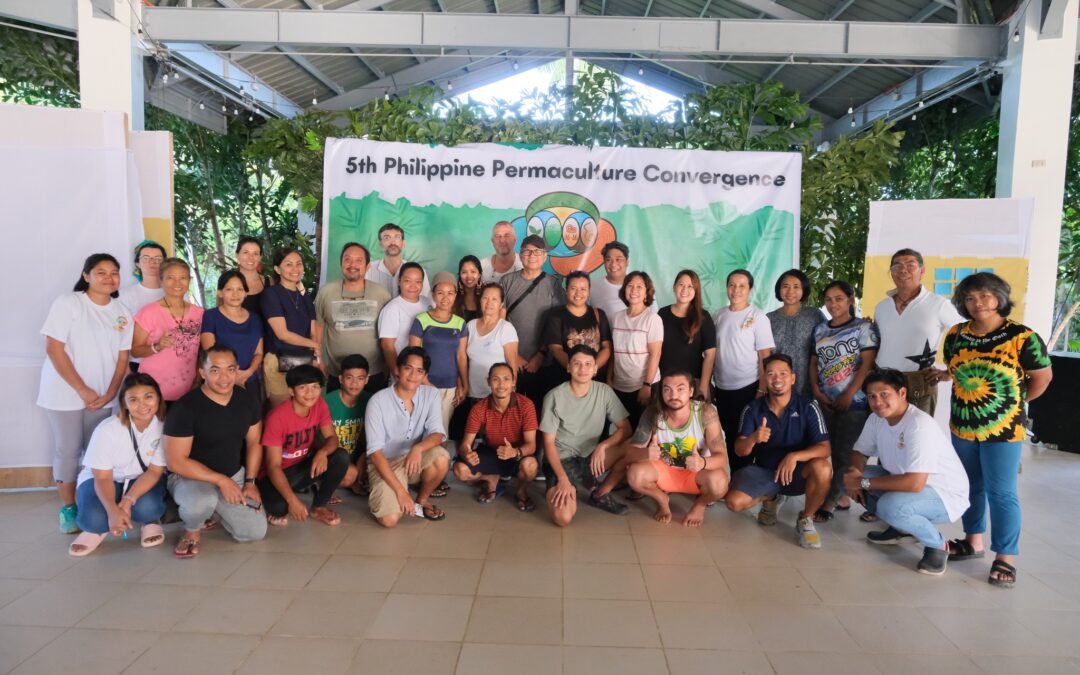 They have learned a lot from the various lectures and interactions they had with other farmers and permaculturists. Perhaps one of the more memorable experiences during the event was when Manang Adelwisa and Manang Elizabeth presented the results of one of the group discussions they participated in. To see them speak out and share their thoughts about topics they are knowledgeable about is a great honor.

Indeed, this is our dream for every farmer: to re-discover their voice, to re-ignite their passion for shaping Philippine agriculture, and to become true forces for change. 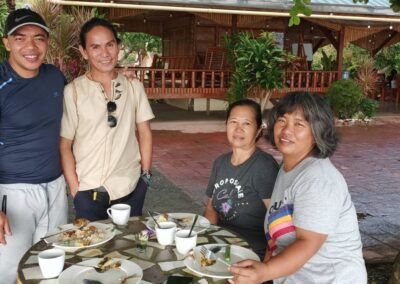 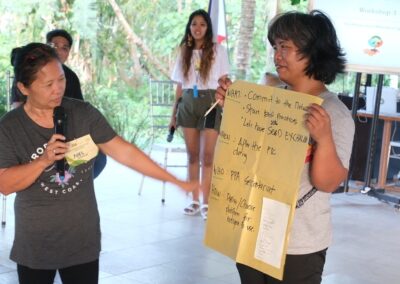 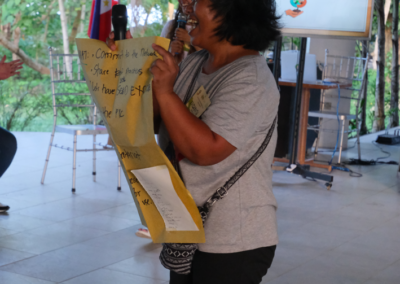 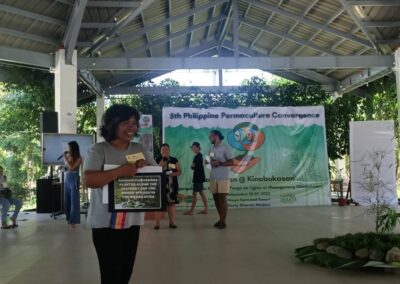 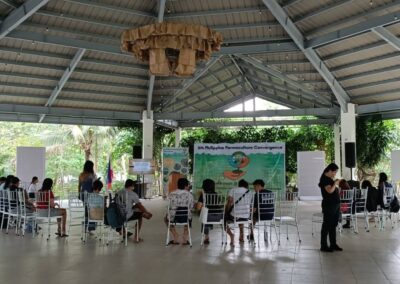 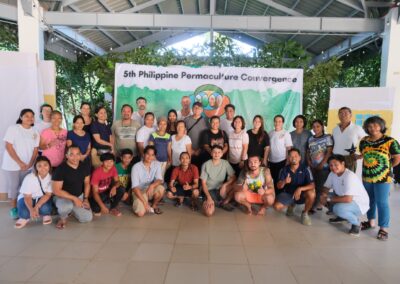 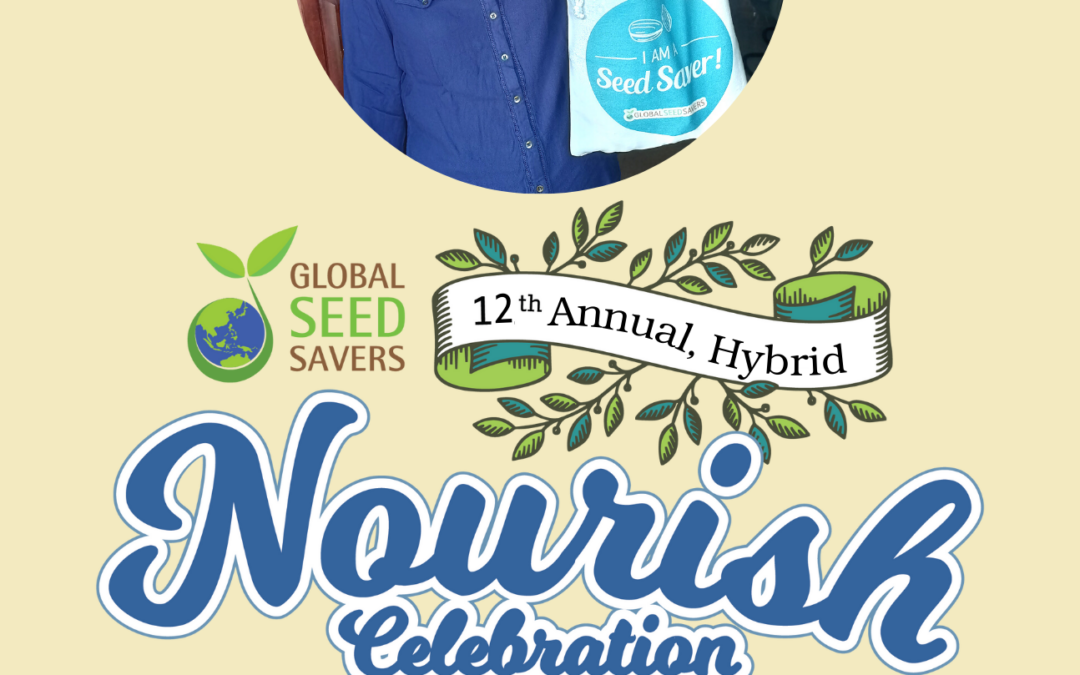 Save The Date For the 12th Nourish Celebration!

We are excited to be returning to an in person Nourish in Denver and also include our virtual community with this Hybrid 12th Annual Nourish Celebration.

Please Save the Date and more details soon to follow!

Team GSS is Heading to New Delhi, India for the FAO 9th Governing Body Session for the Treaty on Plant Genetic Resources

Thanks to our mentor and strong advocate, Bill McDorman (formerly with the Rocky Mountain Seed Alliance, now at Cornville Seeds) we have been accepted to attend the Food and Agriculture Organization, 9th Governing Body Session on the Treaty for Plant Genetic Resources in New Delhi, India in mid-September.

Our Executive Directors, Sherry Manning and Karen Lee Hizola, and Bill McDorman, will be attending as observers. This is a tremendous opportunity for us to advocate for our small-holder partner farmers and network with the delegations and participants from around the world.
To get updates regarding this visit, make sure to subscribe to our social media accounts.
We are thrilled to have the opportunity to participate in this exciting FAO gathering and learn, contribute, and ensure that the voices of the true heros in agriculture are represented, our dedicated partner farmers. At this critical moment in history there has never been a more important time to advocate for the restoration of local food and seed systems.
Sherry Manning 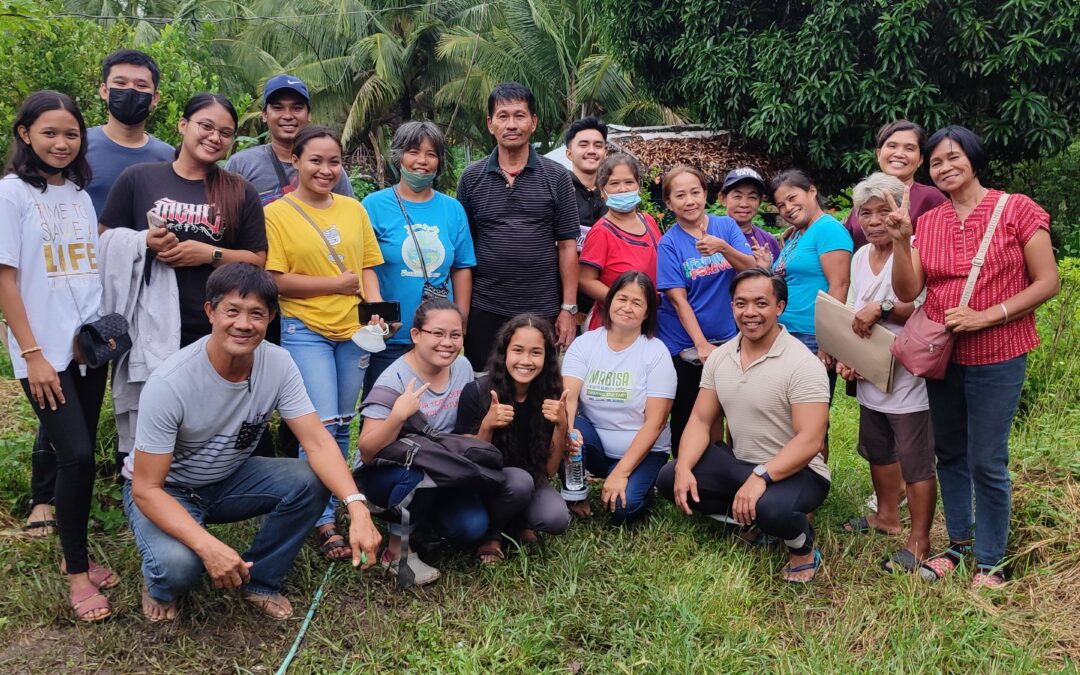 Last July 20-21, 2022, our team went to Lobo, Batangas to hold a seed school with a group called MABISA. Efren, our Philippines Program Manager, Elizabeth, our Benguet Field Coordinator, and Karen, our Philippines Executive Director facilitated the workshop. The workshop was attended by 20+ participants from the Mabilog na Bundok at Sawang Organic Producers Association (MABISA-OPA), and students and teachers from the Batangas State University.

Here are a few photos taken during the workshop: 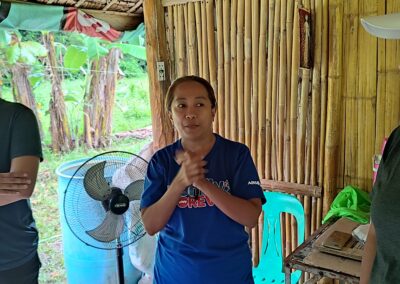 Staff of the ABS CBN Foundation Maving (center) and Neil (left) giving a brief feedback of first day’s training and telling a brief explanation about our partnership. 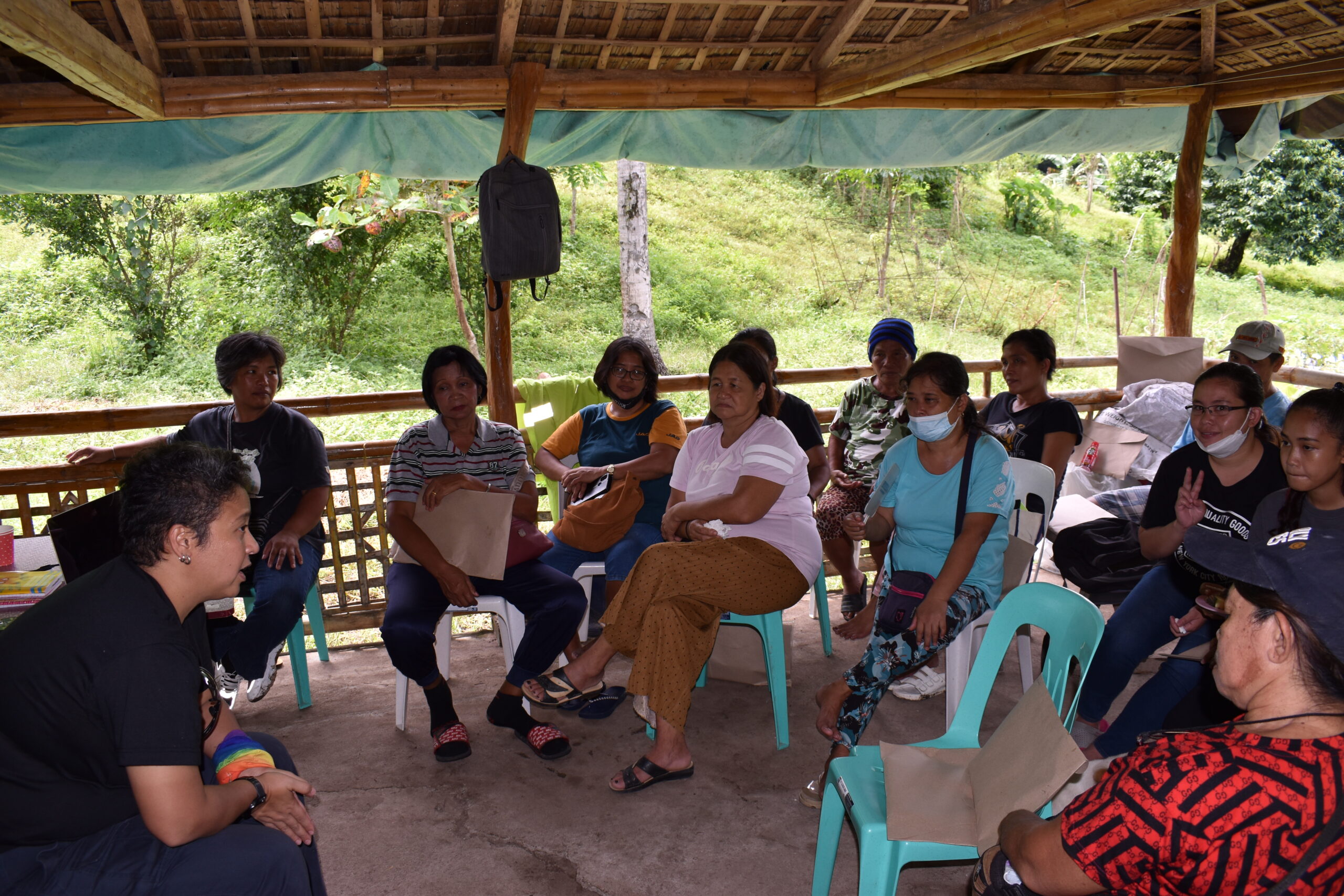 Around 80% of the participants are women. The woman next to Elizabeth is Conception. She had led a protest against the mining exploration years ago which attracted the attention of ABS-CBN foundation’s Bantay Kalikasan unit. From this time on, the foundation had been working with the communities from where Conception and her group belongs— Barangay Mabilog and Sawang (they coined their group name MABISA from this two barangays). 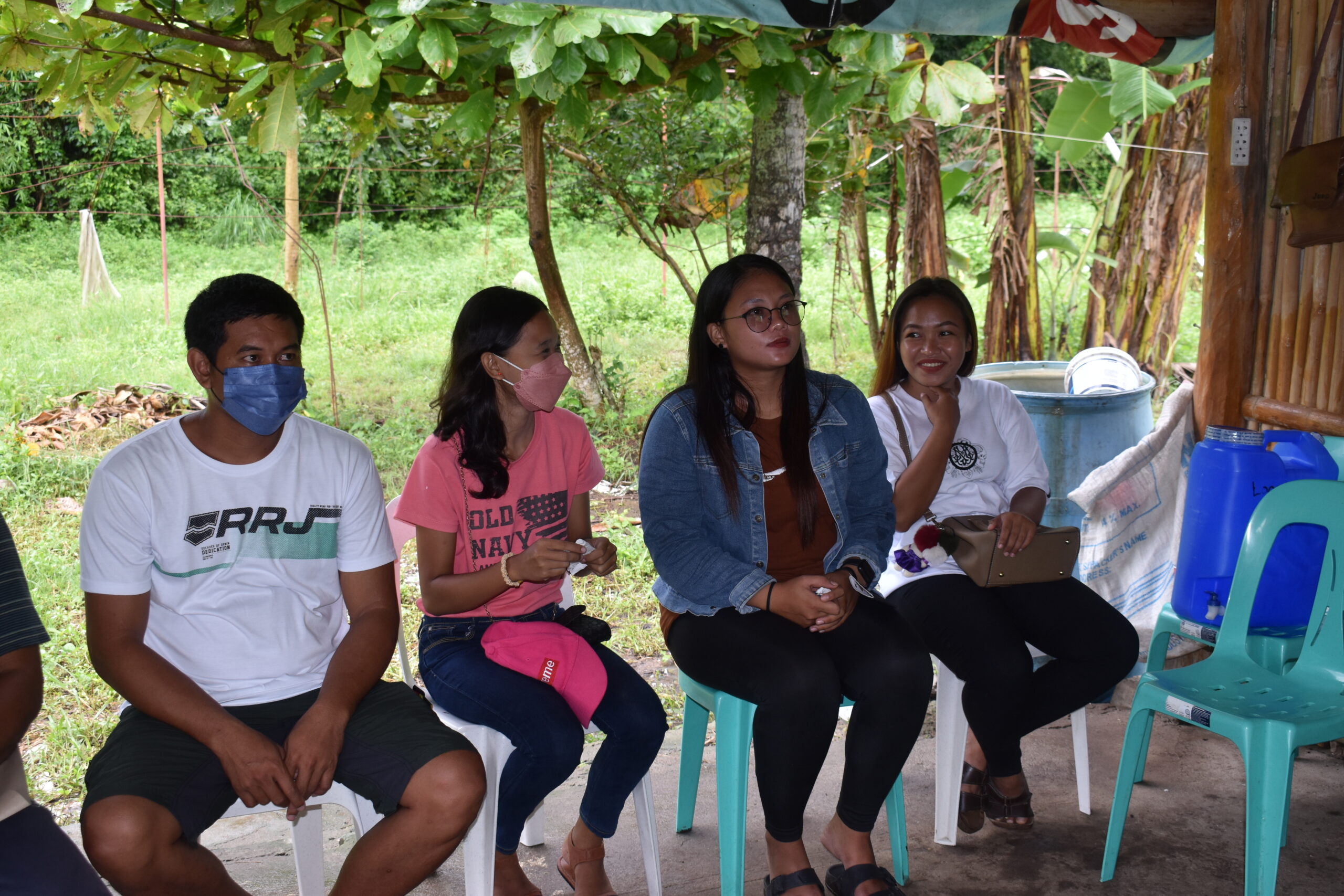 A picture of some participants. These girls are from the Batangas State University and are in their 2nd year in college and are majoring in Agriculture. Almost a third of the total participants come from this college. 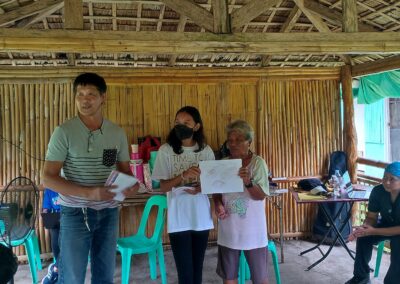 Francisco, one of the participants alongside his group member Petronila and a BSU student, is reporting to the whole group what they have learned from the training. 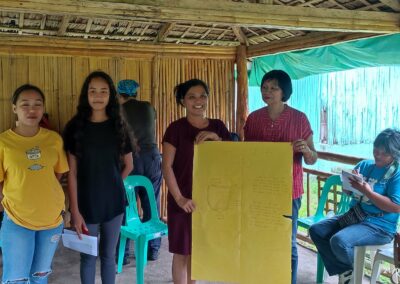 Participants Reporting To The Group.

Here, one of the groups is presenting what they have learned from the two-day training. This training is a hybrid of Teacher’s training and Seed School which is why return teaching is a significant component. 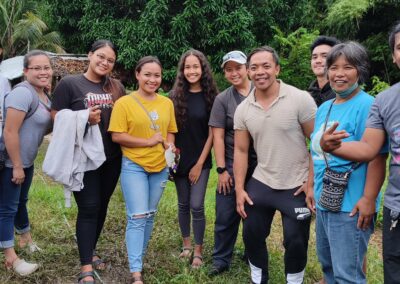 Students and Teacher from the Batangas State University.

The man on the right side is June Ramirez. He is the practicum supervisor of the BSU students who participated in the training.

Why partner with MABISA Group?

Our connection with MABISA begins with our partnership with ABS-CBN Foundation. Back when Gina Lopez was still the director of ABS-CBN Foundation, they implemented some eco-tourism, and livelihood programs in Tublay (an example of this is the Tublay Organic Farming Practitioners Association or TOFPA, wherein some farmers from the Benguet Association of Seed Savers were also members). From that time on, we have been consistently communicating with ABS-CBN Foundation, and they have indicated their interest in bringing our signature workshop in Lobo, Batangas.

MABISA is a community-led organization which was initially organized by ABS-CBN Foundation. Its members belong to Barangays Mabilog and Sawang in Lobo. They currently run the MABISA Eco Farm where people come and visit to learn about various ways of doing agriculture and experience the farm life up close.

Why is this partnership important to GSSP?

Our vision as an organization is to create “hunger-free and healthy communities with access to sustainable, farmer-produced seeds and food”. We also hope to establish community seed libraries in as many areas in the Philippines as possible.

Finding new partners who recognize the importance of saving native seeds and growing food in a sustainable way helps us grow our impact in the Philippines. Every new partner we find brings our communities a step closer towards food sovereignty.

Lobo is a good place to start spreading our advocacy in the CALABARZON region. The ABS-CBN Foundation has already done the legwork in organizing and empowering MABISA to become stewards of their land. Through our seed school, we hope to complement and enhance agricultural practices. 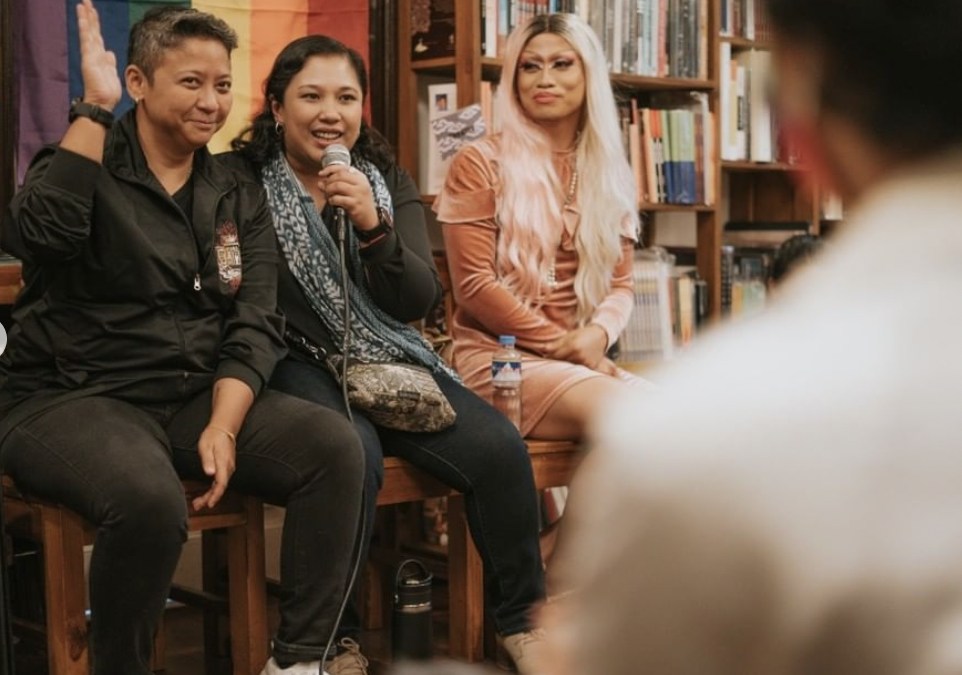 Last weekend, my partner and I were invited to be guests of a story-sharing Pride month event. We were honored to have been given the chance to talk about our relationship and how we’re navigating through all the challenges of being an LGBTQ couple in the Philippines.

At one point in the conversation, I asked if everybody in the audience was out because I was genuinely surprised at the age range. There were children as young as 10 and adults in their 40s or 50s. The answer was interesting because many said that they were only partially out. By that, they meant that they were out to their friends and not to their families or some iteration of that.

It hit me that I am one of the lucky ones because I am now at a place where I can confidently express who I am without fear of rejection or judgment. Years of self-work and support from family and friends have afforded me that.

My experiences moving through a sometimes kind and an oftentimes hostile environment for LGBTQIA++ has compelled me to always try to be a safe space for people. Reserving judgment has more benefits that we could automatically just glean from the surface. What happens when we allow people to be fully themselves without fear of criticism almost always creates a beautiful outcome. When we let let people tell their stories through their lens unencumbered by the need to fit in or to please, the space becomes freeing. And freedom, we know from history, is something our ancestors fought for. It is also something we continue to fight for today.

Last March, we launched our seed sovereignty campaign. While the use of the word sovereignty has become more common, the concept is still rather abstract and difficult to define. The closest I’ve come to a direct translation in Filipino is “kasarinlan” which means “to be in control of the self”. It would be very easy to just say it means independence in English but like every language, Filipino has nuances in how it formulates words that just giving a direct translation results in losing some of the depth of the original word. To give a little context, kasarinlan comes from the root word “sarili” which means self.

This idea of autonomy is similar in every arena. In seed sovereignty, it is fighting to regain control over the growing, saving, and sharing of seeds. In the LGBTQIA++ movements, it is fighting to create safe spaces to just be and fighting to be afforded the same rights and freedoms as everyone else.

It is so much easier to give up. But that’s me coming from this privileged place of being open about who I am. The hope that someday, the children who were in the audience would not have to struggle and would not need to come out because they’re loved and accepted for who they are is what gives me strength to keep on. Every battle won is like a reassuring hug to my younger self: it’s going to be okay.

Fighting for freedom in the present is holding on to the vision of a better future: a future where kasarinlan is not just an abstract concept but a reality.